TRIBUTES pouring in for American representative John McCain after he passed away at age 81 after a fight with a forceful cerebrum malignancy. 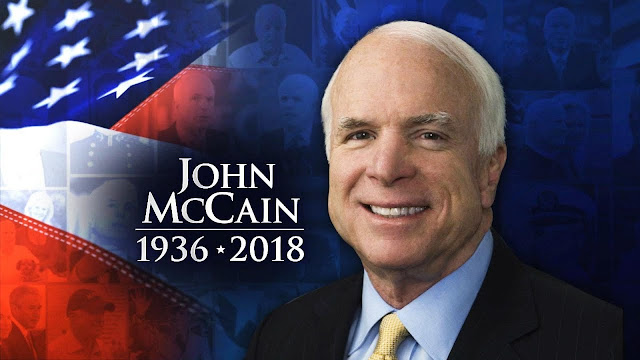 The horrid news was affirmed in an announcement from his office.

"Representative John Sidney McCain III kicked the bucket at 4:28pm on August 25, 2018. With the Senator when he passed were his significant other Cindy and their family. At his passing, he had served the United States of America dependably for a long time," the announcement read.

The long-term Republican was determined to have a forceful type of cerebrum tumor called glioblastoma in July, 2017.

He had already been dealt with for skin and prostate diseases.


Senator John McCain was a true friend of Australia who was committed to strengthening the alliance between our two nations. He was a man of great courage and conviction. Our thoughts and prayers go out to his wife, Cindy, and all the McCain family during this time.

US President Donald Trump expressed his sympathy to the McCain family.

My deepest sympathies and respect go out to the family of Senator John McCain. Our hearts and prayers are with you!

McCain's family as of late declared that he had chosen to stop his malignancy treatment.

In an announcement, they stated: "The previous summer, Senator John McCain imparted to Americans the news our family definitely knew: he had been determined to have a forceful glioblastoma, and the forecast was not kidding. In the year since, John has outperformed desires for his survival. Be that as it may, the advancement of malady and the relentless progress of age render their decision. With his typical quality of will, he has now discontinueed medicinal treatment."

The announcement proceeded to state: "Our family is tremendously thankful for the help and thoughtfulness of every one of his guardians throughout the most recent year, and for the keeping overflowing of concern and warmth from John's numerous companions and relates, and the a large number of individuals who are keeping him in their petitions. God favor and thank all of you."